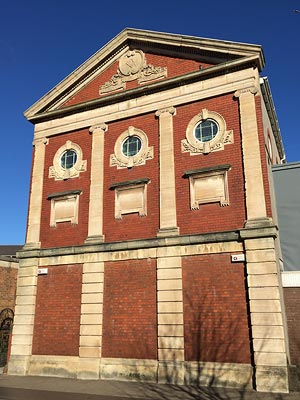 In order to enable the Brethren of the Afan and Margam Abbey Lodges to have the opportunity to take Office and increase their interest in Freemasonry it was decided to form another new Lodge in Port Talbot, which was enthusiastically supported by members of both the aforementioned Lodges. At a Regular Meeting of the Afan Lodge No 833 on the 4th of January 1945 the petition for the proposed new Baglan Lodge was submitted by W. Bro Ivor V. John ProvSGW, W. Bro Andrew Scott PPrSGW and Bro Gwyn Saunders. The Petition was signed by W. Bro James Clee the Worshipful Master on behalf of the Afan Lodge with Bro J R Webster, Senior Warden and Bro Alfred Lewis, Junior Warden. In due course the Lodge was Consecrated on the 19th April 1945 by The Right Worshipful Brother R P St. John Charles Provincial Grand Master. In the early days Lodge Members paid for their meals and guests came free. Guests and Members then had a whisky on the house.

Masonically speaking the Baglan Lodge is one of twins, as the Lodge of St Illtyd No 6078 at Neath was Consecrated the day before the Baglan Lodge. The date of the Warrant in each case being the same, the 7th of March 1945, both Lodges having reciprocal Official Visits each year. In the early days Lodge Members paid for their meals and guests came free. Guests and Members then had a whisky on the house.

The Installing Master, the Very Worshipful Brother Edgar J Rutter PGD Deputy Provincial Grand Master, installed W. Bro Ivor Vaughan John as Worshipful Master. The Senior Warden was W. Bro Andrew Scott and the Junior Warden was Bro Gwyn Saunders. The remaining Officers were appointed and consisted of Brethren well known in the area. The Lodge’s logo is St Catherine’s Church and Spire, in nearby Baglan. This Church is the second at Baglan. The old Church, built in the twelfth century, was used for services until 1882. The logo depicts the clock tower and the golden weathercock on top of the spire. The spire is easily visible from the M4 motorway between junctions 41 – 42. The Church cost over £17,000 to build and was the gift of Griffith and Madelina Georgina Llewellyn of Baglan Hall. Mrs Llewellyn laid the foundation stone in June 1875, St Catherine’s Consecrated by the Bishop of Llandaff in March 1882.

Since its Consecration the Lodge has had seventy-two Masters, each only serving one year and no Past Master has had to go into the Chair for a second time. The Lodge has had father and sons as Masters, Brinley D. Beynon WM in 1974, Bruce M Beynon in 1988 and Adrian B Beynon in 1993, Tom Phillips in 1965 and Barry J Phillips 1987. Godfrey V Bendall became WM in 1975 and John Llewellyn Bendall taking the Chair in 1996. The late W. Bro John Chappell took the Chair in 1990, and his son Christopher Chappell also became Worshipful Master in April 2010.

The Lodge has been blessed with loyal and long serving members. The late W. Bro T Glyn John was Initiated into the Baglan Lodge on the 12th of January 1961 and served as Worshipful Master in 1975. In Province he had the rank of PPrSGW. W. Bro Glyn served the Lodge as Chaplain for twenty-five years, coupled with the office of Charity Steward for fifteen years. Keen to set and maintain high standards and uphold traditions in all aspects of Freemasonry, he was renowned for his wit and charm and first class orations at Festive Boards.

Bro George McKenna was a member of the Baglan Lodge, being Initiated in October 1977, and continuing his membership until he died in 2006. On his Initiation night his three blood brothers travelled from Scotland to be with him and in the Festive Board they appeared in full Highland Dress and piped Bro George into the dining room. When Bro George became a member of the Craft he was already a holder of a British Empire Medal, having been given this honour in 1966. George was very active in the Royal British Legion, formerly serving in the Scots Guards in campaigns in Italy, Norway and the Middle East. By virtue of his military background and experience he was appointed Parade Marshall (1980 – 2003) at the annual Armistice march in Port Talbot.

Harry was called up in the early days of the war and served on destroyers. During combat in the Far East the vessel that Bro. Harry was serving on sank a Japanese cruiser, and during her service he was awarded a campaign medal, and went on to become a Masonic Veteran of sixty years service. In 2007 he was delighted to have been appointed a PPrGStwd, and was a regular in his attendance at Lodge meetings until he died in 2013.

The Lodge had two other Masonic Veterans who have since passed to the Grand Lodge above in W. Bro William E Hopkins who was a Joining Member from Margam Abbey Lodge No. 5257, where he was Initiated on the 17th of October 1940, and W. Bro David F Ireland who was initiated into the Baglan Lodge on the 8th of November 1951. During a very distinguished military career W. Bro David was awarded the Military Cross, and he served the Lodge as Worshipful Master in 1963. In 1995 the Lodge presented Bro Harry Harris and W. Bro William E Hopkins with inscribed wrist watches to commemorate their long service. W. Bro. David Ireland was presented with books of his choice when he celebrated his fiftieth year in 2001.

In May 1994 the Right Worshipful PGM, The Right Honourable Lord Swansea paid a visit to a regular meeting of the Baglan Lodge. The PGM took an active part in the ceremony when he invested the Candidate and gave an explanation of the symbolic meaning of the First Degree Apron. The Worshipful Master that evening was W. Bro E Phillip Parry, who invited W. Bro John Chappell to Initiate his son Christopher J Chappell. The Provincial Director of Ceremonies accompanying the PGM that evening was W. Bro Andrew L Gretton, who went on to become the DepPGM from 2007-2011.

In 1995 the Baglan Lodge celebrated its fiftieth year. To mark the occasion all present at the anniversary meeting received an inscribed whisky glass. The Brethren of the Lodge in turn presented to the Lodge a Worshipful Masters Apron and this Apron is only worn at Baglan Lodge meetings. It is passed on to each new Master at the Installation Ceremony. Since then the Brethren of the Lodge have also presented Senior and Junior Wardens Aprons and a cushion and front bearing the inscription “Baglan Lodge No 6079”.

Baglan Lodge has become synonymous with good singing. This is no more apparent than when at the Christmas Lodge carols are sung at the Festive Board. The specialty of the Lodge is the “Twelve Days of Christmas”. The December meeting is very popular, is always full to capacity, and invariably attracts visits from Freemasons from all over the Province. 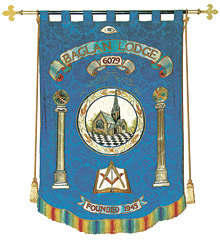